“To use this waterlogged field for testing every now and then was reasonable and to take advantage of it as an emergency landing ground for Home Defence forces was credible, but to employ it as a flying training station was folly and as a Camel training station was lunacy.”
(Arthur S. Gould Lee,  Open Cockpit: A Pilot of the Royal Flying Corps. London: Jerrolds, 1969).

I’m always known as a snapper-up of unconsidered trifles, and especially when researching the snippets that make up this blog.  While researching another forthcoming article I saw a reference to RFC Joyce Green, near Dartford, Kent

When I was writing the piece about the Barnwell brothers (https://airbornerambler.wordpress.com/2015/05/20/connections/)  I noted that that Harold Barnwell was killed at Joyce Green flying the prototype Vickers Vampire night fighter in August 1917.   Vickers’ association with Joyce Green goes back to 1910 when they unsuccessfully attempted a test flight of a machine built in Crayford in association with Hiram Maxim.    Maxim left  the enterprise, but Vickers established an Aviation Department at Joyce Green in 1911, testing aircraft built in their Bexleyheath, Crayford, Erith, and Dartford factories.

Vickers FB.5 Gunbus flying replica G-ATVP, painted as 2345 of the Royal Flying Corps, at Yeovilton in 1966 RuthAS (Own work) CC BY 3.0 via Wikimedia Commons

After the outbreak of war in 1914, Joyce Green assumed a role in the air defense of London from bombing raids by Zeppelins. The airfield’s first occupants under No. 6 Wing were No. 10 (Reserve) Squadron, using a mixed bag of aircraft including Farmans, Vickers FB5s and FB9s, DH2s and FE8s. The role of this unit was to receive pupils from preliminary training schools for final training for their wings. Each course consisted of about 20 pupils and lasted two or three weeks. This included time spent at Lydd where aerial gunnery was practiced at the Hythe range. On gaining their wings the young pilots would get a 48-hour pass before being posted to the Front.

In October 1915  the station put up five aircraft against Zeppelins L13, L14, L15, and L16; two would land safely after the action.  2nd Lt Claude Ridley took off from Joyce Green in a BE2c and spotted the airship for a brief moment in searchlights. He fired off 20 rounds at extreme range but then lost sight of the airship.

One noteworthy arrival at Joyce Green was James Thomas Byford McCudden VC DSO (and Bar), MC (and Bar), Croix de Guerre, who came in March 1917 to take up the appointment of Wing Fighting Instructor, to instruct advanced students (including a certain M. Mannock) on combat techniques.  McCudden’s view of Joyce Green was that it was:

“a quiet spot near Dartford, and the aerodrome is considered a good one, although it is below the level of the Thames which flows past the aerodrome, and the ground is a little spongy”
(Flying Fury, Five Years in the Royal Flying Corps, 1930)

Although the field was used operationally, it had many factors weighing against it. Arthur S Gould Lee went on to say:

“A pupil taking off with a choked or failing engine had to choose, according to wind direction, between drowning in the Thames (half a mile wide at this point), or crashing into the Vickers TNT works, or hitting one of their several high chimney stacks, or sinking into a vast sewage farm, or killing himself and numerous patients in a large isolation hospital, or being electrocuted in an electrical substation with acres of pylons and cables; or trying to turn and get back to the aerodrome. Unfortunately, many pupils confronted with disaster tried the last course and span to their deaths”
(Open Cockpit: A Pilot of the Royal Flying Corps)

McCudden’s mild opinion notwithstanding, the reputation of the field as a dangerous place for flying caused the RFC to search for other airfields south of London. Their search led them to a farmer’s field close to the village of Biggin Hill, and all flying was moved to the new Biggin Hill station by 1917.

RFC wireless testing was carried out at Joyce Green from 1915, following a lingering demarcation dispute between the Royal Engineers and the RFC  caused by the latter’s takeover of the Marconi facilities at Brooklands (Surrey) in 1914.  Wireless testing for the RFC had previously been under the authority of the Royal Engineers. It was deemed necessary to separate the staff of the two organizations, the Engineers being sent to Woolwich while the RFC relocated to Joyce Green.

Interestingly the airfield hosted some of the earliest elements of the US Army Air Service to arrive in Europe. Three flights of the 8th Aero Squadron arrived at the end of 1917 and were dispersed. It seems that pilots were attached to British units for further training.  Ground crews were attached to British training units to learn maintenance procedures. Ground crews from the 149th Aero Squadron were apparently at Joyce Green in May 1918.

Vickers continued test flying from Joyce Green. The prototype FB.27 “Vimy” was built at Crayford , taken by road and re-assembled at Joyce Green for test flying. 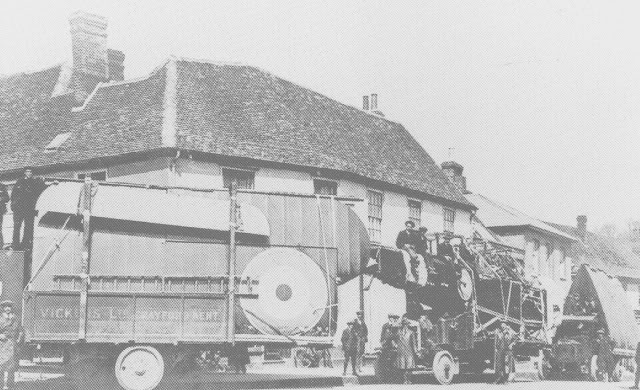 A dismantled Vickers FB.27 “Vimy” on its way to Joyce Green for reassembly and test flying, photographed outside “The Bear and Ragged Staff” Public House, London Road, Crayford.  Date unknown, circa 1917.  Readers may be interested to know that the pub still exists as of July 2018.  (Public Domain via Wikimedia Commons)

The map below gives some idea of the general topography and salient features of the area around Joyce Green. The location of the airfield is (I assume) at the top of the dark green stripe in this Google image.  the former Joyce Green Hospital (demolished in 2000) is at the right-hand edge of the dark green strip on the banks of the Thames, (sadly) close to the sewage treatment works mentioned by Arthur Gould Lee.

I never was much of a local historian until now, and since I’m 4500 miles away there’s only so much I can do, but the locality is full of history and the story of the airfield is given in a little more detail at its Wikipedia page.  As with most little things which piques my interest there is a lot more to the story once you start digging.  At this point it seems the sensible thing to do is to show my enthusiasm and let yours (my handful of readers) take it from there.   It is interesting to think that without Joyce Green, there may have been no Biggin Hill, which may have caused a small change in British military aviation history as we know it.