Andrea Ding-Kemp emailed me and said that her husband’s grandfather, James E. Kemp, flew B-29s in China in the 1940s and used to say “Ding Hao” a lot when he was alive.  Was he in some way associated with the B-29 called Ding How ?

Andrea sent me a couple of pictures including James E. Kemp’s USAAF aircrew ID card and a picture of a piece of enemy metal which apparently hit his seat during combat operations.  She also told me that he was part of the crew of two B-29s, named Lucky Seven and The Craig Comet.

It only took a couple of minutes searching on Google to find that 1st Lieutenant James E Kemp was in fact assigned to the 794 Bomb Squadron, 468th Bomb Group. Their pilot was Capt. Harold Estey, so they were known as the Estey crew.

42-6407 Lucky Seven was one of the very early build Superfortresses, a B-29-20-BW built by Boeing in Wichita, KS.  She was assigned to the to the 795th Bomb Squadron, but was re-assigned to the 794th when the former squadron was deactivated in October 1944 due to shortages in equipment.  Lucky Seven was declared “war weary” (not able to continue war operations) on January 11th, 1945 and returned to the Zone of the Interior (United States).    I looked up her serial number on Joe Baugher’s website http://www.joebaugher.com/usaf_serials/usafserials.html and found one additional piece of information.  Lucky Seven was scrapped on December 21st, 1949 at Pyote Air Force Base, Texas.

42-63445 The Craig Comet was a B-29-15-BA built by Bell in Atlanta, GA.  I was amazed to find that a photo of the aircraft and the Estey crew appears in the Wikipedia page for the 468th Bomb Group. 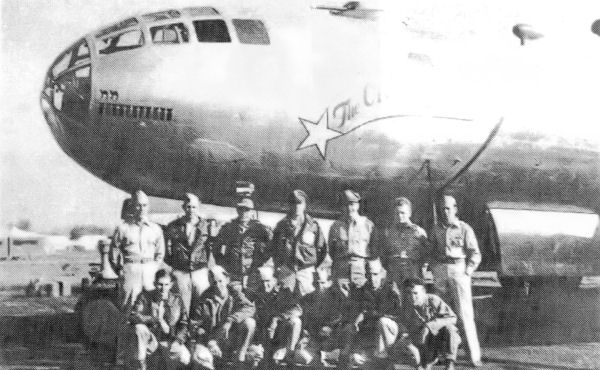 Captain Harold Estey and crew of B-29 “The Craig Comet” of the 794th Bomb Squadron,  468th Bomb Group. Co-Pilot James E. Kemp is in the back row on the left of this group. (Public Domain via Wikimedia Commons)

The Estey crew flew from Kharagpur Airfield in India (they were the first crew to arrive there) and also flew from the prosaically named Field A-7 at Pengshan, (Szechwan Province) China.    Click here for a list of missions flown by the 58th Bomb Wing (which included the 468th Bomb Group).    When flying operationally from Pengshan,  itself 1200 miles from Kharagpur, the first task of the B-29s was to haul their own operational fuel supplies, bombs, ammunition, and other necessities over the Himalayas (the ‘Hump’).   ‘Hump’ missions were symbolized by a camel painted on the nose of each aircraft that carried them out. Two such camels are visible on the nose of The Craig Comet at the time this picture was taken, as well as 11 bomb symbols indicating 11 operational missions for the aircraft.

The 468th Bomb Group website (http://www.468thbombgroup.org) contains a potted history of the Estey crew, which it seems was supplied by James E. Kemp himself in 2007. Estey’s crew did not transfer to Tinian when the 58th Bomb Wing moved en masse to the Marianas in the Spring of 1945. A commentator on the 468th site speculates that the crew had amassed more “hump” and combat hours  than any other crew and so they were rotated home from India in May 1945.  The Craig Comet soldiered on briefly in her new home.  She was badly damaged in a raid on May 1945 and crashed on landing at West Field, Tinian.

There is little doubt in my mind that James E. Kemp  knew, or knew of the B-29 named Ding How in the 794th Bomb Squadron. I am sure he would have been aware of its loss and forced landing in the Soviet Union since he was operational in the same squadron at the same time.

I must mention also that James E. Kemp’s USAAF ID card listed his birth date as being at the end of August 1918, so it seems fitting that my first blog post of August 2018 should in some way connect with and honor the centenary year of the late veteran.  James Edward Kemp, a Pearl Harbor veteran,  served in the USAAF and later USAF from 1940 to 1962, retiring with the rank of Lieutenant Colonel.