I was wondering whether to blog anything about the CFM-56 engine following its recent appearance in the news headlines.  The media coverage following the in-flight failure of an engine on Southwest Airlines Flight 1380 on April 17, 2018 dredged up several stories going back through the years, one of which piqued my attention and made me want to fill in some of the gaps in the narrative.   I have no doubt my teaching inclination influences my thinking, but the back story of one of the more common jet engines is a lot more interesting than I had imagined.

The CFM-56 is also known by its military designation F108 (I had no idea about this – I need to look at the F101 and F110 too to clarify which is which) and is joint project of Safran (formerly Snecma) and GE Aviation under the name CFMI (CFM International).  According to its Wikipedia page, the CFM-56 one of the most common turbofan engines in the world, with 30,000 units built by July 2016.

The project might have met an early (one might say premature) demise which was not of its own making. The first example ran in June 1974,  but for the next five years there were no orders for the engine. Two things saved the CFM-56. Firstly,  a contract with several American operators of the DC-8 to re-engine their aircraft, and secondly the decision by the US Air Force to re-engine the KC-135 fleet.

The origins of the CFM-56 are truly mundane and can be traced to two men meeting in Paris.  Gerhard Neumann from General Electric (GE) and René Ravaud from Snecma introduced themselves to each other at the 1971 Paris Air Show. In the 1970s GE and Snecma saw some potential in collaboration to rival Pratt & Whitney, and a partnership was born. I didn’t know this, but Snecma (Société nationale d’études et de construction de moteurs d’aviation) is the result of the nationalization of the Gnome & Rhône aero engine company in 1945.  Snecma and Sagem SA merged in 2005 to create the Safran Group, but I’m getting ahead of the narrative

Lobbying at the highest level.  US President Richard Nixon and French President Georges Pompidou prior to the U.S – French summit conference in Reykjavik, Iceland on 31 May – 1 June  1973, at which the production and export of the CFM-56 was discussed.  (Public Domain via Wikimedia Commons)

The politics behind the partnership and the marketing of the engine may be one of the reasons why no-one ordered any of them in the first few years. GE’s application for an export license was denied on national security grounds by Henry Kissinger in 1972. Lobbying continued at the very highest level,  and the matter appeared on the agenda of the US-French summit between Richard Nixon and Georges Pompidou in Reykjavik on May 31 – June 1 1973.  Chronologically this is a rather fascinating time in the former US president’s career.  A month previously, on April 30, Nixon had announced the resignations of H.R Haldemann, John Ehrlichmann and Richard Kleindienst, and the firing of John Dean. By the end of June 1973 a Gallup Poll found that 98 percent of Americans had “heard about” Watergate.

It would appear that the diplomacy involved with “French-made” engines involved GE sending engine cores from its plant in Ohio to the Snecma plant in France, at which point American GE technicians would mount the French components to the cores, and would release the engine for finishing. I assume that nothing as convoluted as this happened with American engines assembled in Ohio. The strict controls were related to the fact that the engine core for the CFM-56 was also being used in the development of the B-1 and thus was a fairly sensitive national security issue for the United States.

Orders for the CFM-56 started to come when aggressive marketing resulted in the contract to re-engine the DC-8 for three US Airlines (Delta, United and Flying Tiger). Boeing was prepared to offer a CFM-56 powered 707 named the 707-700, but no civilian orders were forthcoming. The research on the 707-700 project (and the prototype itself)  did however convince the US Air Force of the viability of the CFM-56.  The USAF promptly ditched the allegedly dirty and inefficient Pratt and Whitney J57 from the KC-135 fleet and replaced it with the CFM-56, calling the new type the KC-135R.

Boeing later announced that a CFM-56 would power the 737-300 series airliner.  Some re-design work  was necessary to accommodate such a large engine on an aircraft with a low wing and minimal ground clearance.  The CFM-56-3 for the 737  has a characteristic flat-bottomed engine nacelle which many of us have noticed on our travels around the world. 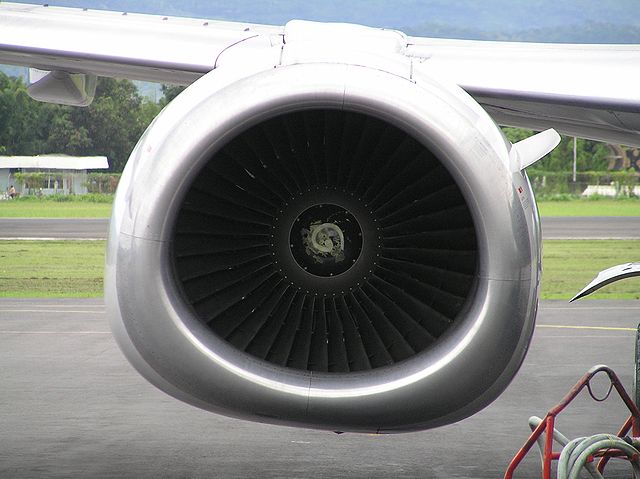 In a gesture of European solidarity,  Airbus have also joined the CFM-56 user community for large and small Airbus products.

The full list of applications for the CFM-56 according to its Wikipedia article is as follows.

Never seen this before. CFM-56 installation on a NASA DC-8 (Public Domain via Wikimedia Commons)

Sadly,  the CFM-56 has had its share of bad publicity.  The most notable failure (notable to me, anyway) occurred in the UK in January 1989. A fairly new British Midland 737-400 on a flight from London to Belfast crashed at Kegworth while trying to make an emergency landing at East Midlands Airport, following a fan blade failure in a CFM-56-3.   Two other fan blade failures occurred in British 737-400s shortly afterwards, resulting in the type being grounded world wide while modifications were carried out to the engines.  The recent failures on Southwest Airlines 737s (Flight 3472 from New Orleans to Orlando in August 2016, and Flight 1380 from New York LaGuardia to San Francisco in April, 2018) indicate that fan blade fatigue is an ongoing issue.

There have been incidents of CFM-56 engines flaming out in heavy rain or hail.  The most dramatic incident  involved  TACA Flight 110 from Belize to New Orleans in May 1988. Both engines on the 737-300 flamed out while passing through hail and heavy rain, and the crew was forced to carry out a deadstick landing on a grassy levee adjacent to NASA’s Michoud Assembly Facility in eastern New Orleans near the Gulf Intracoastal Waterway.  Only one minor injury was sustained among the the 38 passengers and seven crew.

The story of TACA 110 is pretty amazing as this YouTube clip may show.  The hail damage on the nose cone of the 737 is visible in the thumbnail below and is indicative of the strength of the storm through which the aircraft inadvertently passed.

As a result of this and other flameout instances,  CFMI made modifications to improve the way in which the engine handles hail ingestion. The pilots of TACA 110 selected continuous ignition for the engines as their training advised in the weather they experienced. CFMI have added a sensor to the CFM-56 to start continuous combustion automatically in conditions of heavy hail or rain.

I was tempted to give some click-bait title to this blog entry and play up the Watergate connection, but that would be a little dishonest.   However it is interesting that a turbofan engine which we find so commonplace today has its roots in a meeting of two executives the early 1970s, and featured on the international summit agenda of a US President who was, to say the least, looking a little beleaguered politically by this time.