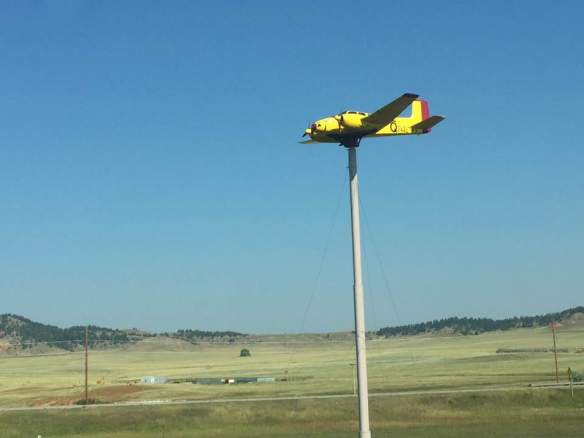 Mick Quaal’s Beechcraft Twin Bonanza up a big pole by the side of I-90 in Wyoming.  – August 2017
(Picture by Glenda Kiger, used with permission)

Today my friend Glenda Kiger posted picture on Facebook (that’s it up above)  that caught my eye.  A yellow twin-engined aircraft up a very long pole apparently somewhere in Wyoming.

A quick Google search confirmed my first thought that it’s a Beechcraft Twin Bonanza. It may be a D50E model but the differences between the models are fairly small. I’m happy to accept it’s a D50E and move on.  The Twin Bonanza was first flown in 1949 and production began in 1951. The United States Army adopted the Twin Bonanza as the L-23 “Seminole” utility transport, purchasing 216 of the 994 that were built. (Wikipedia)

That pole, though, is obviously pretty big. The wingspan of a Twin Bonanza is 45 feet, fuselage length about 31 feet. Google and YouTube (and my Mark 1 eyeballs)  suggest the pole is 70 feet tall.  I was also interested in what appears to be some kind of device under the aircraft that might be a pivot, which would allow the aircraft to rotate with the wind, making it one heck of a weather vane.   Other posts on the web suggest that the propellers rotate freely in the wind.

The aircraft is apparently owned by Mick Quaal (hence the big “Q” on the side – you can see the rest of the name when you enlarge the picture) and is located to the east of Sundance, Wyoming, just off I-90. I had a trundle round in Google Earth to see if I could see it, but a 45-foot yellow dot in the vast Wyoming countryside didn’t stand out, sadly. Never mind, I shall try again another time.

There is also a rather nice YouTube video of the aircraft being hoisted into its current resting place.  An article in the Sundance Times (Wyoming) suggests the aircraft was put there in the summer of 2014.

Anyway, it’s something something nicely quirky for National Aviation Day here in the United States. Thanks Glenda!

4 thoughts on “Meanwhile, in Wyoming”