I had a couple of days off in Oklahoma recently,  and visited the Tulsa Air and Space Museum (and Planetarium)   which has changed considerably since I visited in 2000.  A lot of things change in seventeen years.   The museum has moved to a new building and has a lot of interesting exhibits.    I’ve  learned a couple of interesting snippets about Oklahoma’s aviation heritage which may not be new to my reader, but to which I hadn’t given much thought.  More of this will follow in other articles. 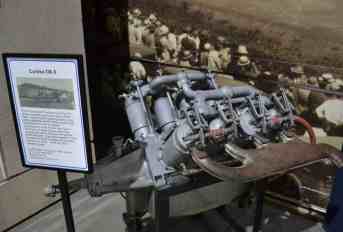 I wonder what stories this could tell.  Curtiss OX-5 at the Tulsa Air and Space Museum, Tulsa, OK – July 2017 (Robert Smith)

I love looking at the stories detailing the early years of aviation.  Tucked away in a quiet corner were the stories of people like Wiley Post and Duncan McIntyre. Also tucked away but neatly displayed was a Curtiss OX-5 engine.  I wasn’t going to write about it, but it’s occurred to me just to what extent the OX-5 made a considerable mark on the early years (some would say the golden age) of American aviation.  The OX-5  was an eight liter (500 Cubic Inch) V8 which first saw the light of day in 1910.  Its ancestors were V-twin motorcycle engines, but Curtiss moved into aircraft engines, and  the OX-5 was the first American aircraft engine put into mass production.  I was surprised to read that more than twelve thousand OX-5s were built.  One of its major uses at the outset was  powering Curtiss’ own  JN-4 “Jenny” trainer.

At the end of the First World War there was a considerable surplus of OX-5 engines,  and this made the OX-5 virtually the default choice for nascent American commercial aviation industry.  The Swallow of 1924 and the Travel Air 2000 (the gloriously nicknamed “Wichita Fokker” because of its perceived resemblance to the Fokker D.VII)  both used the OX-5 and both have surprisingly similar nose designs.    Douglas Corrigan’s 1929 Curtiss Robin  (see previous article) had an OX-5 engine when he bought it, and which he swapped for a more powerful Wright radial. One may speculate if he’d have succeeded crossing the Atlantic with an OX-5 powered Robin.

Then I wondered if I had any other OX-5 pictures, and yes, it seems I do.  When I went to visit the Kansas Aviation Museum in Wichita on a blistering June afternoon in 2015,  they had a shiny OX-5 in their exhibition.  Interestingly this one seems to have a little more of the ignition wiring in place, but not the exhaust pipe. 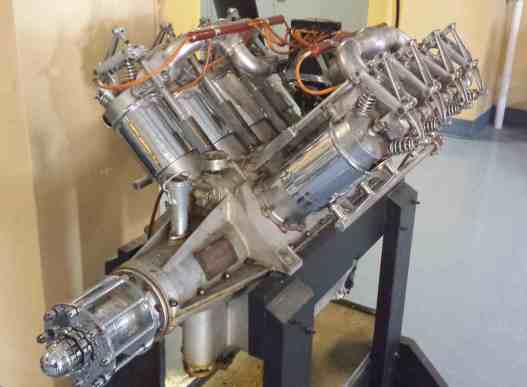 I’m sure there’s a story here too.  Curtiss OX-5 at the Kansas Aviation Museum, Wichita, June 2015

While we’re talking about nose shapes here’s the KAM’s Swallow looking lovely in June 2015 – complete with a rather lovely streamlined cowling covering the Curtiss powerplant inside.  Notice the slab-like radiator underneath. 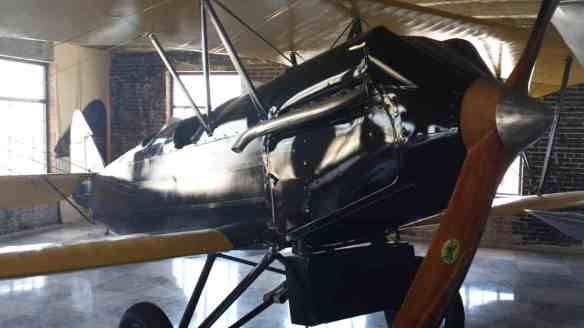 The rather gorgeous OX-5-powered Swallow Aircraft “Swallow” at the Kansas Aviation Museum, Wichita, KS, photographed in in June 2015 (Robert Smith – Own Work)

And finally,  a picture (not mine) of the “Wichita Fokker”   – the Travel Air 2000,  also with an OX-5 engine. You can see why Howard Hughes wanted at least one example of the Travel Air when he was making Hell’s Angels.   Those balanced ailerons, and the fin/rudder shape are strongly reminiscent of the Fokker design.  With a Ranger engine installed,  the similarity was amazing, but that’s another story.   The nose lines of the Travel Air here are remarkably similar to the Swallow and the OX-powered Waco 9 of the same vintage.  Consider Buck Weaver (founder of Waco) and his Wichita connection with “Matty” Laird and Swallow,  and the coincidence is taken further still.  This is hardly surprising.  There are only a certain number of things you can do to make a streamlined cover for an OX-5.