Every so often I get the urge to re-read one of my old paperbacks, and recently it was my 30-year old copy of Duane Unkefer’s Gray Eagles. Originally published in 1986, Gray Eagles is the story of a group of Luftwaffe veterans who are invited to assemble in 1976 for a reunion-cum-flying holiday in Arizona, except that they will be flying armed Bf109G aircraft and will shoot at a number of selected targets in missions planned by their Staffel Commander and Executive Officer. These latter two have a score to settle with a member of the Confederate Air Force (as it was known then) who killed one of their comrades when he himself was a young  Mustang jock in the USAAF.

Duane Unkefer (who weirdly does not have a Wikipedia page) is a teacher at Santa Barbara City Community College and will be leading a course on fiction writing at the Santa Barbara Writers’ Conference in June 2017.  I read a 1986 article in the LA Times which described him going on the road to promote his book after the USA gave it a fairly muted (read, non-existent) response on first release.  I googled him, and saw that in earlier life he was a promotion and advertising executive for Harley-Davidson who had a burning ambition to be a novelist.  I don’t see any specific mention of aviation in the scarce biographical information and to a certain extent, the lack of aviation knowledge shows in the book.

Don’t get me wrong.  I like Grey Eagles. It has all kinds of stylistic flourishes that project the fantasy and I am happy to indulge the little bits of oddness like the restorers modifying the Bf109 canopy to make it slide rather than swing on a hinge.   If anyone did that on a warbird today, I think the community would emit a collective scream of shock.  The story, however needs it (so I believe).

The planning and the first couple of missions are written in a pretty believable style. The moment when the eight Bf109s of 76 Staffel intercept five CAF Mustangs over Phoenix en route to an Airshow in Chino, CA is beautifully done and one of the high points of the book.

I think there are two or three points where things do get a little too contrived.  The P-51 equipped unit of the task force which is established after the second attack on an active US training base in Arizona is a lovely idea,  and necessary for the book (in order to have the final confrontation) but odd.  I can imagine some crusty veteran saying “give me another P-51 and I’ll go and get those SOBs” but even in 1976 I could imagine the official response as “Don’t be so stupid.” Secondly, as a self-avowed aviation nut myself I find Unkefer’s choice of the F-5 as the USAF jet fighter of choice in a couple of set pieces is plain weird.  Yes,  F-5s were stationed at Williams AFB (the base that 76 Staffel attacked in the book) from 1973,  but I never heard of anyone in the USAF except aggressor training squadrons using F-5s. I think of the F-5 as one of those export-only models that the USAF didn’t seem to want at the time. However I love the F-5/T-38 shape so much that it can pass. I wonder what the USAF really would have used then – perhaps an F-4?  Who knows. It doesn’t make a huge amount of difference except that it takes you out of the story for a moment to think “F-5? Huh?”     I love the addition of the Spitfire from Milwaukee (or wherever) and the slightly overdone “what-ho, chaps”  RAF veteran Wing Commander who flies in because he heard on the grapevine there was some sport to be had.   I just wish it hadn’t been a Mark Vb he was flying. 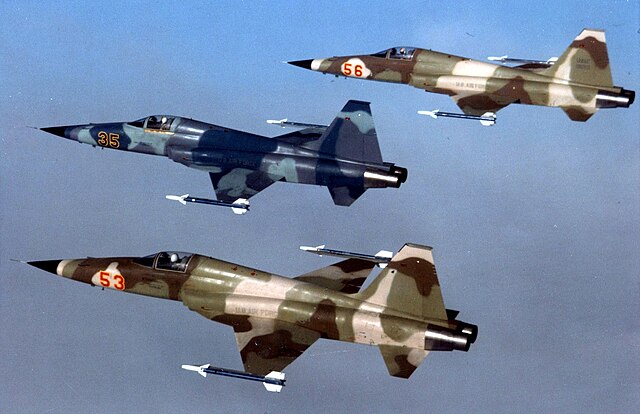 Some of the Bf109 modifications and the use of the F-5 could be attributed to poetic license in order to progress the story or just to the fact that Unkefer wasn’t all that familiar with aircraft and could have used a bit more time to check a few minor-ish facts.  My only significant yelp at the time of first reading occurred when one of the main protagonists started playing tracks from Pink Floyd’s album The Wall on his car stereo.  This is a neat trick,  since The Wall wouldn’t be released for another three years. The band were working on Animals in 1976,  and even this album only saw the light of day in January 1977.  It would have to have been a track from The Dark Side of the Moon, or Wish You Were Here,  and that wouldn’t have hurt.

Don’t let these criticisms put you off.  If you haven’t read Gray Eagles, try it.  It is one of two aviation novels (the other being Gavin Lyall’s Shooting Script) which I could imagine transferring neatly to the big screen, even though it’d be a bear to make.  These days, finding eight Bf109s would be much less of a problem than it would have been in 1976.

Probably the best comment is from a 1985 Kirkus review which said that if you can follow the reasoning of the German commander you will enjoy this colourfully-written book.

“Of course it is a mad undertaking. . .It is brilliant, so brilliant that it seems mad!”

Welcome, my son. Welcome to the Machine.  🙂