There is comfort in listening to familiar pieces of music and also, in my view, from re-reading a favourite book.  From time to time I re-read Stephen Coonts’ Flight of the Intruder, and when I do, I’m always a little bit impressed with the laconic style and its evocation of life as a US Navy A-6 pilot in 1972. I’ve never read any of Coonts’ other novels, and only realized a few days ago there was actually a sequel (Final Flight, published 1988) and a prequel to the sequel – (The Intruders, published 1994!) to Flight of the Intruder.  I should have a look at them when I have time.

I’ve had two or three copies of Flight of the Intruder in paperback, one of which came free with the computer game of the same name,  and all have continued their journeys in life  – i.e. I never got any of them back.  I decided to buy a cheap copy from Alibris a few months ago, and ended up to my delight with a 1986 first edition, published by the the Naval Institute Press, for the grand total of 99 cents (plus shipping, which was more than the cost of the book.  No matter.)

Having read it again a few days ago, I was thinking a little bit more about A-6s and aircraft carriers, and cast my mind back a little.  It occurred to me that almost exactly forty years ago, in February 1977,  I found myself in the Bay of Naples,  standing on the flight deck of the USS John F Kennedy (CV-67) with a few of my secondary school friends.  It was an amazing experience, and how we got there is probably best left to another blog entry.  I still don’t know how one of the teachers wangled the visit – it was certainly more interesting to me than a free afternoon dodging the citizenry of Naples.  My visit was not long after the incidents of September 1976 in which the destroyer Bordelon collided with the JFK during night replenishment, and an F-14 dropped off the ship after a catapult issue. The resulting race with the Soviet navy to recover the aircraft and its AIM-54 Phoenix missiles was redolent of Clive Cussler or Tom Clancy. 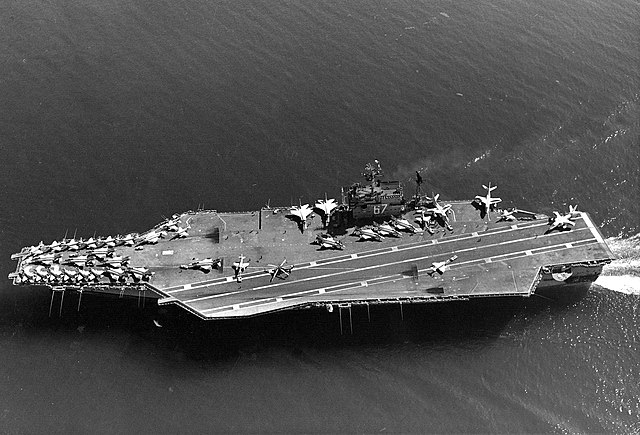 USS John F. Kennedy (at that time designated CVA-67) underway in the Atlantic Ocean during her shakedown cruise in November/December 1968. Visible on the flight deck are EA-3B, A-4, RA-5C, and F-4 aircraft of Carrier Air Wing 1 (CVW-1).  I’ll have a look at a bigger picture another time and try to identify the helicopter.
(U.S. Navy National Museum of Naval Aviation photo)

I remember that one of our guides on the tour was a Bombardier-Navigator (BN) from one of the A-6 Squadrons embarked on the JFK.  He had a fairly marked accent from one of the Southern states, and when one of the teachers asked him what would happen if the proverbial balloon were to go up,  he replied “This is all for one Nucular Strike” –  Cue stunned silence from group of English school kids.

Looking back, it was quite an experience.  I sorely regret that I ran out of 35mm film for my camera and hadn’t had a chance to stock up before the excursion.  There were F-14s,  S-3s, A-6s of different kinds, (they didn’t want us to photograph an EA-6B on the flight deck), A-7s, a couple of E-2s and apparently a C-2A Greyhound which one of the guides said looked like “something Jimmy Doolittle would have flown”.  One of our hosts was an S-3 pilot (I think) who seemed like the archetypal well groomed ROTC youth transposed into uniform on his first tour – he didn’t seem much older than us, although he clearly was. The A-6 guy was much older and a little more grizzled, and it pains me when I think back, that no-one asked him if he or any of the A-6 crews had been in action in South East Asia.  I am sure some of them must have done so.  This was only 1977 after all,  and even Steven Coonts was still serving in the US Navy – he was honorably discharged in 1977 with the rank of Lieutenant.

Now, CV-67 has been decommissioned and the new Gerald R Ford Class CVN-79 will take the JFK name in 2020.  The A-6, A-7 and F-14 are all retired from the US Navy.  The S-3 retired from front-line service in 2009 although there is some unconfirmed speculation that mothballed S-3s could be returned to USN service in 2019 as tankers, in the face of perceived ballistic missile threats from the naval forces of the People’s Republic of China.

I’ve said in some other piece of writing, familiar books and familiar records are a time machine.  Listening to a piece of music I first heard in 1981 transports me instantly to the location where I first heard it because of some vivid memory.   I hadn’t quite made the connection between Flight of the Intruder and my cruise round the Mediterranean in 1977, but I have now. I tip my hat in a little salute to that day 40 years ago.