When I was very young, and even at that age fairly air-minded,  there were two or three almost contemporary aeroplanes which inspired and enthused me, and seized the imagination of another childhood friend.  These were the English Electric / BAC Lightning,  The Bristol 188,  and the Fairey Delta 2.   All of these machines were highly angular, aggressive looking but sleekly beautiful silver birds which we could imagine ripping though the sky at enormous speeds no matter what the defence white papers of the late 50s and early 60s might have said.

Only two Fairey Delta 2s were built and, it transpires, I must have seen both of them, long after they were relegated to museums.  The first to fly, WG774  was extensively modified (and renamed as the BAC.221) as part of the aerodynamic research into the Concorde’s ogival delta (ogee) wing.  (Ogee BTW is trotted out by me in Words with Friends much too often!).   It is now preserved in the Fleet Air Arm museum in Yeovilton, Somerset and looks a lot different from the picture below.     WG777 is apparently preserved in the RAF Museum at Cosford near Wolverhampton. I have visited Cosford and looked at the research collection and have no memory, sadly. 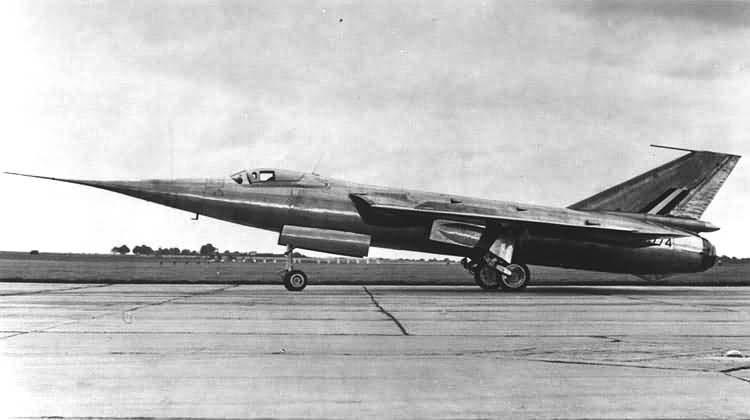 The first Fairey Delta 2 WG774 in original form landing at the 1956 Farnborough Air Show using its ‘droop snoot’. (RuthAS [Own work] CC BY 3.0 via Wikimedia Commons)

My reasons for blogging the FD2 today are partly because I was reading about the anniversary of the Bell X-1 and its supersonic flight.   I thought about saying something about the Miles M.52,  whose technology was offered to the United States and which went in part into the X-1,  – a proposed exchange which, it is alleged, the American side did not reciprocate.   This is all too well written, and I don’t particularly want to keep blogging about anniversaries when Bryan Swopes does more frequently than me and much better.

No, let me reminisce of the days when my childhood friend Martin let me play with his second shiny metal Bristol 188 model (he’d been given two by mistake, a nice problem at age 6) and we talked of the FD2 and the Lightning.  Martin’s dad Michael, who was a Free-Flight model builder and Radio Ham in his spare time, made a lovely simple balsa wood glider using the Lightning  shape. I thought it was the best thing I’d seen for ages.