Whenever I get a spare moment,  I look through the pages of  This Day in Aviation in case there is something that catches my eye.  Today I saw an item about the crash of the second prototype DH.108 “Swallow” TG306,  which occurred 70 years ago today on 27 September 1946.   Test pilot Geoffrey de Havilland Jr. (son of Geoffrey senior,   the founder and owner of the  de Havilland Aircraft Company Ltd.) was killed. 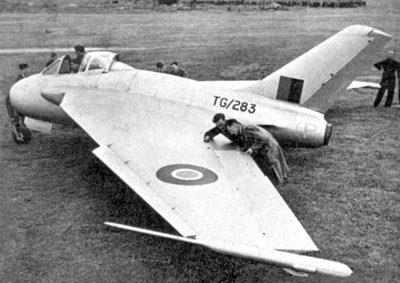 The DH. 108  was the first British swept-winged jet aircraft and the first British tailless jet aircraft.  It was intended to test the low speed handling of swept wing jets and  in that respect was a design study for the future Comet airliner.   Its resemblance to the Messerschmit Me163 “Komet”  is striking but appears to be coincidental.   The Ministry of Supply gave the DH 108 the “Swallow” name,  which  was never officially adopted by the company.

I hadn’t realized, until looking closely at pictures of TG283 and TG306,  that the forward fuselage is that of a Vampire, slightly extended, with swept wings attached.   (Train spotters will note the Air Ministry serial of the prototype Vampire F.1  was TG274 – the fuselages of the first two DH.108 prototypes were taken from the production line at English Electric).   Eric “Winkle”  Brown described the DH.108 as  “A killer. Nasty stall. Vicious undamped longitudinal oscillation at speed in bumps”.

TG306 suffered structural failure while flying over the Thames Estuary on September 27th 1946 in a dive from 10,000 ft at Mach 0.9 and crashed in Egypt Bay. The subsequent accident investigation “centered on a structural failure that occurred as a shock stall placed tremendous loads on the fuselage and wings. The main spar cracked at the roots,  causing the wings to fold backwards immediately.” (Wikipedia edited by me)

I found some interesting YouTube footage of the three Swallows including TG306 and Geoffrey de Havilland.

Egypt Bay has a personal significance for me,  since it’s located a few miles from where I grew up. The North Kent marshes have always been fairly atmospheric. They certainly inspired Charles Dickens, especially in Great Expectations, (the grave that provided Dickens with his inspiration for Pip’s dead siblings is located at Cooling church. Cooling village is visible on the map here),  but they also have their share of aviation lore too.  The last resting place of Amy Johnson is somewhere in the Thames Estuary – her Airspeed Oxford crashed in mysterious circumstances there on January 5th,  1941.

The little red Google location indicator on the map below shows roughly where I grew up, across the River Medway from Rochester, and Egypt Bay is also shown. Just to the east of Egypt Bay is  St. Mary’s Bay (not to be confused with many similarly named bays in Kent). Interestingly, searching for “Egypt Bay”  in Google Maps elicits no results at all.

The wreckage of TG306, according to Bryan R. Swopes, was found on September 28th.  Another ten days passed before Geoffrey de Havilland’s body was recovered. He had suffered a broken neck and fractured skull, probably as a result of being thrown around the cockpit as the aircraft entered its “vicious undamped longitudinal oscillation at speed”  as Brown described it.