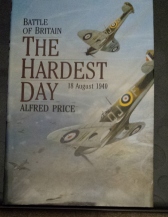 My Copy of Battle of Britain: The Hardest Day. In my case this is the 1988 Arms and Armour Press reprint.

When Dr Alfred Price’s book Battle of Britain: The Hardest Day  was published in 1979 it managed to embed itself into the consciousness of aviation historians in much the same way that the Eighth Air Force became “The Mighty Eighth” after the publication of Roger Freeman’s seminal work in 1970.  Mention the date to any Battle of Britain aficionado and I’m sure at some point the phrase “hardest day” will be uttered.

Since today is August 18th I couldn’t resist the temptation to mark the anniversary although it boggles me to think that this is the 76th anniversary of the event.

In this phase of the Battle the Luftwaffe was still carrying out its attacks on British airfields. One of the attacks which took place on August 18th was the low-level strike on RAF Kenley in Surrey by nine Dornier 17s of the 9th Staffel of Kampfgeschwader 76 (9/KG 76) as part of a co-ordinated attack on Fighter Command airfields in the South of England.    Photographs of the wreckage of two of these Dorniers  frequently show up in histories of the Battle of Britain both in print and on the World Wide Web.   I don’t propose to be an exception to the rule and so I feature them here. 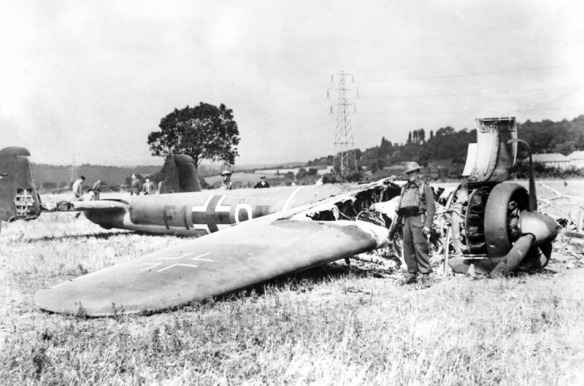 Dornier Do 17Z-2 (F1+DT) of 9/KG 76 crashed at Leaves Green, Kent on August 18th 1940 after attacking RAF Kenley. Note that the Swastika on the aircraft’s fin has already been removed by souvenir hunters.

RAF aircraftman guard the remains of Dornier Do17Z-2 (F1+HT) of 9/KG76 shot down during the low-level attack on Kenley aerodrome, 18 August 1940. The aircraft crashed in Golf Road, Kenley at 1.20pm. (Imperial War Museum)

In his book Battle Over Britain (Bourne End: Aston, 1990)  Francis K Mason says “it has been affirmed that 18th August witnessed the hardest fighting of the entire Battle of Britain, but the postulation is debatable”  since the tempo of air combat, in Mason’s words “did not match that of the 15th and 16th”  as a result of disruption to the communications networks during the attack, and that the total number of British fighters engaged in combat on this day was surpassed  on at least half a dozen occasions.  (p.222)   Price in his introduction says his “hardest day” claim actually refers to the total number of aircraft put out of action in a single day on both sides, both in the air and on the ground.

Both Price and Mason agree that 18th August saw the defeat of the Stuka as an independent weapon since the Ju87 was not deployed in large numbers against England after this date.