I’m a Smith.  It’s the most common last name in the western world, maybe.  There are a lot of us and we get confused for each other. Back in the days when early ATMs actually swallowed your card to read it,  the machine would occasionally fail to return it.  To add insult to injury,  a couple of times my old bank mailed my card back to the wrong Smith.

In later years I had a more interesting alternate.   Robert Smith was (and is) lead singer of The Cure. Once in a while, when I was working in a university in the UK I’d get breathless sounding e-mails from students asking me if I was *the* Robert Smith.  This is, of course, a matter of perception.

Anyway, what has all this got to do with aviation?

Readers may remember I’ve been having a lot of fun with the B-29 / Tu-4 article that came in the July 2016 edition of FlyPast.  I was struck by the accompanying illustrations which didn’t really sit comfortably with the photographic material.  I think the illustrations are inaccurate representations of the B-29s which force-landed in Vladivostok between July and November 1944. One of these inaccuracies is the result of case  of mistaken identity.  It was was not perpetrated by the author of the FlyPast article, but seems to have been around for many years.  This is the case of “Ding Hao”  or “Ding How” and specifically the confusion between:

Ding How (or Ding Hao) is a Chinese expression much used by American pilots in the China-Burma-India (CBI) theater and it seems to mean “everything’s great / thumbs up / you’re the best” – so naturally there are several different American aircraft of the period which have the nickname painted on them.

Of our two B-29s. 42-6225 came from the very first production block,  and both fell within the group of 175 B-29s which General H.H  “Hap” Arnold wanted for operation “Matterhorn.”  The 175th and last of these B-29s was 42-6365 which he signed personally, and which was later named the “General H.H. Arnold Special.”  All of these aircraft were therefore the subject matter of the “Battle of Kansas.”

The very early B-29s were painted in the US standard finish of Olive Drab and Neutral Gray, and 42-6225 was no exception. 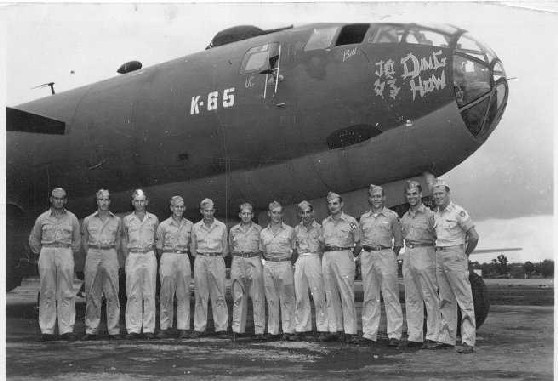 When I started researching the history of the interned B-29s I wanted to see illustrations of their former USAAF careers.   “Ding How” was remarkably easy, it seemed.  But there were factual errors of a pretty gross nature. Some confusion clearly arose between the two “Ding Hows.”

Nice picture – but oh, the caption.

I don’t know which book this illustration came from.  My guess is it’s an Osprey or Squadron/Signal publication – judging by the caption font, I guess the former. The caption  gets the AAF serial and Bomb Group right, but confuses the fate of this “Ding How” with the other machine from the 468th Bomb Group.

Sadly the incorrect identification continued in some fairly authoritative sources, leading to awfully hybridized illustrations like this:

Right serial number  – but someone has applied the yellow stripes of the 795 BS / 468th BG  and the “Billy Mitchell”  pennant to an aircraft that, as far as I can see, never flew with the 468th and which NEVER force landed in Vladivostok.

The illustration in the July 2016 issue of FlyPast (which I shall not reproduce) takes the picture above one step further. The illustrator applied the serial number of the other “Ding Hao” (42-6358) but still uses the rest of the Olive Drab /Neutral Gray 444th BG machine as his canvas.

So why do I think these illustrations are wrong?    The answer is very simple and was even provided in the FlyPast article itself. It’s labeled as Ding Hao, although clearly the Bomb Log and 468th BG Shooting Star emblem have now been removed.  This is 42-6358,  but this isn’t a green B-29.

The clincher for me, is this picture (below) from a Russian website on the Tu-4

I take this to be a genuine Soviet picture of “Ding Hao”  with a nice red star  on the fin, and all US national markings and group IDs removed.  You can see pale traces on the fuselage and nose, and with the eye of faith you can *almost* see the 468th BG stripes having been erased from the rudder.  But anyway, the point is – she isn’t Olive Drab.

Compare the Soviet nose shot with this photograph from the 468th Bomb Group: 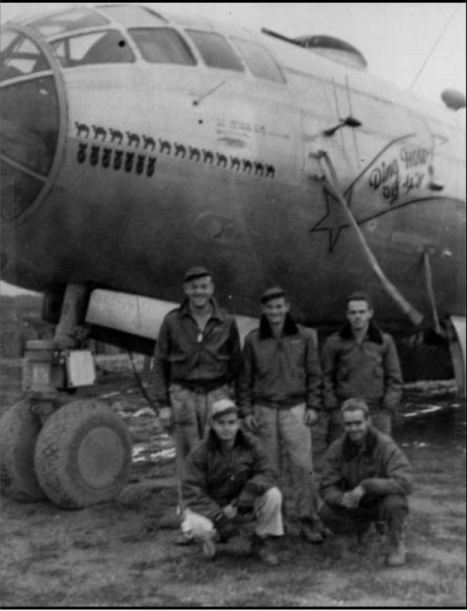 The size and shape of the “Hump” mission markers (the camels) and the bomb log correspond exactly with the painted or stripped areas of the B-29 in the illustration above this one.

One last surprise awaits. Everyone (including me) has been referring to 42-6358 as “Ding Hao”  but look at the name in the Group insignia.  Admittedly I’m wearing bifocals and this is a third or fourth generation copy but that rather looks like “Ding How” to me.

As I said somewhere previously,  it seems unlikely to me that the Soviets, even in their enthusiasm to make an exact copy, would go to the trouble of stripping all the paint off an Olive Drab  B-29 and then re-applying the AAF serial and 468 BG “last three”  on the fin.  I’m not buying it.  My theory is that somewhere, a few years ago, someone saw a picture, made an erroneous assumption and thus a whole generation of mistakes was born.    I would like to set the record straight, assuming I’m right.  I think I am, and this is my way of doing it.

Oh,  and just for the record, I checked with Joe Baugher’s website  to see what happened to the other “Ding How”

So the green one made it back home as a War Weary, while the silver one sat somewhere on a Soviet airfield until about 1954 when most of the Tu-4 fleet was scrapped.

Take it away, Kim.

2 thoughts on “Ding Who? A Case of Mistaken Identity”