The Man Who Owns the Sky, the Master Birdman, the World’s Greatest Aviator.   How many times in the golden age of aviation were sobriquets such as these applied to the adventurers who took to the skies and burned so brightly, but for so short a time?   One such was Lincoln Beachey (1887-1915).   A pilot who, according to his Wikipedia page, was the first pilot to recover an aircraft from a spin by turning into it. Beachey started flying for Glenn Curtis.     105 years ago today in 1911 he was the first man to fly over the Horseshoe Falls at Niagara.  The Smithsonian’s Facebook page  commemorated the event.

Suzy said to me “Is that the same airplane I photographed in Albuquerque?”  and I had no idea.  On closer inspection, no it isn’t, but it’s a fairly close relative.  The Ingram/Foster was a copy of a Curtiss.  Beachey flew a genuine Curtiss.  There are some similarities. 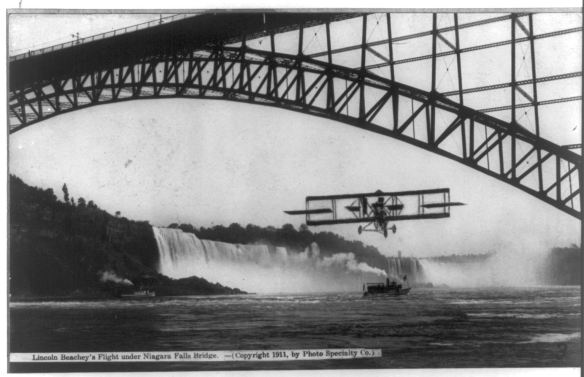 Lincoln Beachey was the first to fly over Niagara’s Horseshoe Falls on June 27, 1911. Pictured here about to fly under the Niagara Fall Bridge. (Library of Congress Picture) 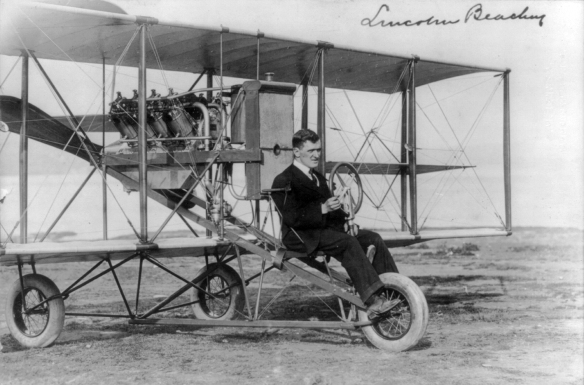 Lincoln Beachey at the controls of his Curtiss (Library of Congress) 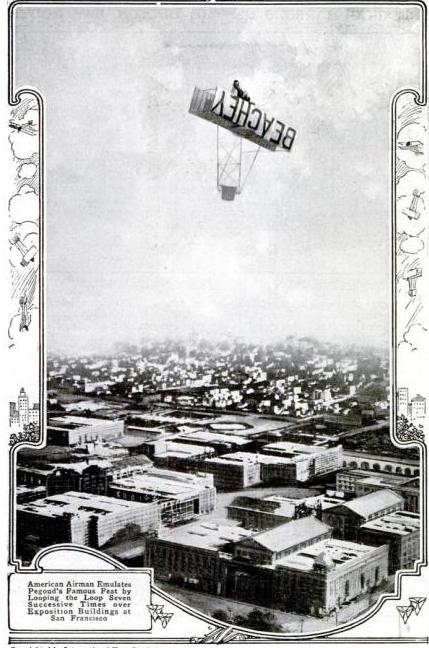 I know it has to be a composite of two pictures, but given the pilot’s position at the very front of a Curtiss pusher, I would have crowned him King of the Sky myself after this.

Beachey made his final flight at the Panama-Pacific International Exposition on March 14, 1915 in the Beachey-Eaton Monoplane. He took the plane up in front of a large crowd, made a loop, and turned the plane inverted. He may have failed to notice his altitude had dropped to 2,000 feet.  He pulled on the controls to pull the plane out of its inverted position, where it was slowly sinking. The strain caused the rear spars in wings to break, and the crumpled plane plunged into San Francisco bay between two ships. Navy men jumped into action, but it took almost two hours to recover Beachey’s body. Even then, rescuers spent three hours trying to revive him. An autopsy found he had survived the crash and had died from drowning.

His funeral in San Francisco was allegedly the largest in the city’s history until then. A Wikipedia writer estimated 30 million people saw him in his career, 17 million in 1914 alone