I’m having rather a lot of fun with this topic, so much so that there ought to be a couple more articles  in it while I set a few things straight in my own mind and perhaps try and draw a few threads together.

Having read the last post and corrected my appalling typing and grammar for the umpteenth time,  I happened to follow a link on YouTube and discovered a very interesting Russian TV documentary about the Tu-4 under the series title “Made in the USSR.”  The English in the subtitles is a little strained at times, but you’ll get the drift.

This in itself was pretty interesting in that it confirmed pretty much all we already knew about B-29 cloning program.    What made me rather excited was a tiny sequence just under three minutes into the program – and here’s a screenshot. 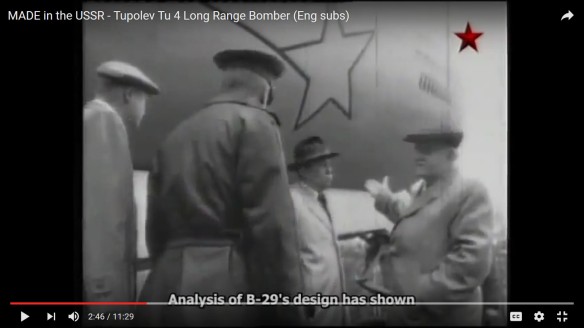 So, that’s a group of Soviet engineers and military being shown over a B-29.  A couple of seconds before you could see the lower portion of a US ‘Star and Bar’  – and on the nose we can clearly see the ‘shooting star’  emblem of the 468th Bomb Group and above the flat cap of the gentlemen on the right there is quite clearly a bomb log and what I assume to be some ‘Hump’  mission markers.

It’s a small thing I know,  but it’s amazing to me that someone was even making movies of this kind in Stalin’s USSR in the late 40s.