This is one of those YouTube videos where the visual element is much less important than the soundtrack.

BBC engineers had set up their apparatus to record a nightingale in a Surrey garden on the night of May 19th 1942. They had done this every year since 1924, when the house and garden belonged to the family of renowned British cellist Beatrice Harrison. The sound of Harrison’s cello, accompanied by nightingales, was the first live outside broadcast made by the BBC and had become immensely popular.     The 1942  broadcast was intended to provide a peaceful and pleasant interlude during the time of war, but was abandoned as a number of RAF bombers, outward bound on a raid, flew overhead.  The recording itself was completed and saved, and has been re-broadcast and re-used many times since the war, even being used in the 1975 album Nightingales and Bombers  by Mannfred Mann’s Earth Band .

The Bomber Command war diary recorded that 197 aircraft – 105 Wellingtons, 31 Stirlings, 29 Halifaxes, 15 Hampdens, 13 Lancasters, and 4 Manchesters – took part in this particular raid on Mannheim. 11 aircraft – 4 Halifaxes, 4 Stirlings, and 3 Wellingtons – were lost.  The engines audible in the clip are more than likely Bristol Hercules, used by the vast majority aircraft taking part the raid. I’m curious whether we may deduce which bombers were heard in the clip. I’m not certain which bases would have used an outward bound route over Oxted, Surrey on the way to Mannheim. Perhaps someone has done this work already. I will have a further look. For the sake of illustration, I found a rather nice illustration of some Wellingtons of approximately the right vintage in the collection of the Imperial War Museum. 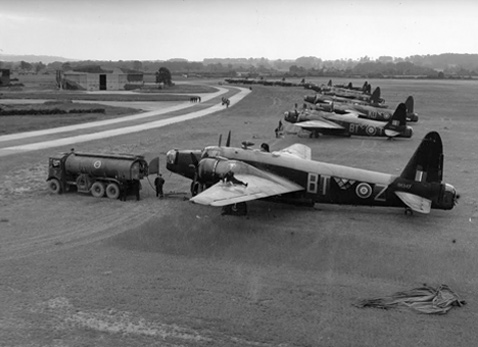